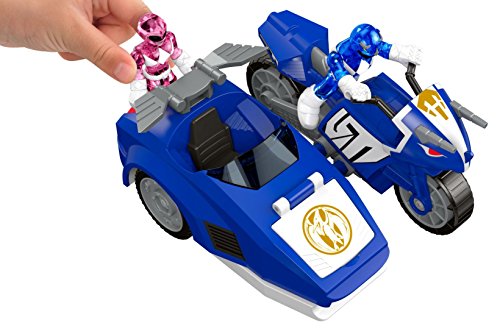 Lord Zedd’s forces are at the attack again! Who will save the earth from his wicked plot? The Blue Ranger is in a position for action and hops at the Triceratops Battle Bike to zoom into battle, and he is brought the Pink Ranger along for back up within the attachable side car! Spin circles across the evil-doers with the bike’s real rolling action. Then load the Power Coins into the side car and turn the Power Pad to fire away at Lord Zedd and his foot soldiers (Sold one at a time and subject to availability.). Evil villains do not stand an opportunity with the Power Rangers on duty! Drive your little one’s imagination with this mighty morphinomenal duo! Fisher-Price Imaginext…Turn on Adventure! Where development comes into play; Cognitive: Imaginative play and storytelling helps kids reinforce their language skills and can instill an early love of reading.
The Triceratops Battle Bike’s real rolling action makes play more realistic
Attach side car to motorcycle to take the Pink Ranger along for battle!
Lift the hood at the side car to load Power Coins, and turn the Power Pad to fire!
Includes Triceratops Battle Bike with side car, Mighty Morphin Blue and Pink Power Ranger figures & 3 projectile discs
Add the Triceratops Battle Bike to other Fisher-Price Imaginext Power Rangers playsets for more morphinominal action-Packed adventures! (Every sold one at a time and subject to availability.)